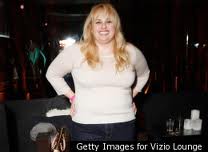 Aussie Actress Rebel Wilson is a triple threat; beautiful, funny and fashionable. You've seen her in the now cult classic Bridesmaids and in the hilarious trailer for the upcoming Pitch Perfect. Being incredibly talented, it's no wonder that Rebel Wilson was cast in these comic relief roles, every scene she's in she steals and has us rolling in the aisles with laughter.

Women of average size like Wilson get zero to minimal screen time normally as the comic relief or the bit part chubby friend, though hilarious at times I'd much rather people focus on how big her talent is than her jean size. We can only hope that the Hollywood casting community will sit up and take notice because much bigger things are in store for this soon to be leading lady we hope.

Wilson not only is redefining what it means to be a plus size actress, she's also making chic and sophisticated fashion her signature on and off the red carpet. Here are a few looks from the comedienne showcasing her curves.